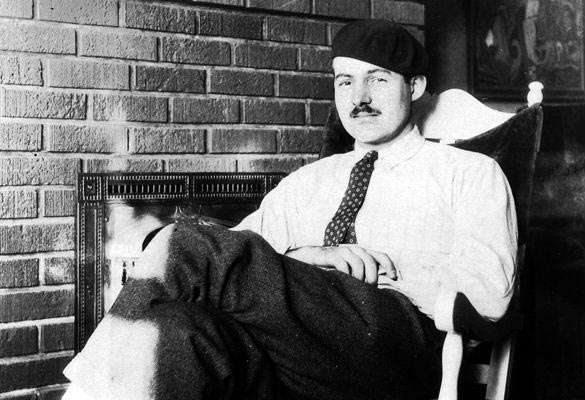 The team of the Hotel Raspail Montparnasse adores Ernest Hemingway. He lived in Paris during the roaring 20’s, and visited many mythical addresses right next to the hotel! We offer you here to rediscover the capital while walking in his footsteps.

Paris for the freedom

Ernest Hemingway, famous American writer, lived a large part of his life in Paris, period that will be immortalized in his novel “‎A Moveable Feast”, posthumously published.

When Hemingway arrives in Paris in 1921, he is a 22-year-old man already  scarred by the Great War. Reformed because of his myopia, he committed no matter what. He then left for the Italian front with the Red Cross. He wanted to become a writer, and thus believed he had to live strong experiences to be transcribed in his writings. He returned from war in 1919, after being badly hit on the legs by an Austrian shell.

When he came back, the writer Sherwood Anderson recommended that he went to Paris, then known to be a paradise for artists. The French capital is indeed a symbol of freedom, far from the prohibition of the United States. Life is also less expensive, which is not pointless for a young writer. Seduced by this perspective, Hemingway leaves for Paris after marrying Elizabeth Hadley Richardson, as European correspondent for the Toronto Star.

The Raspail Montparnasse team visited the first places that marked Ernest Hemingway’s stay in the capital.

In the footsteps of Hemingway in Paris…

Let’s start our walk in the 6th district. After crossing the beautiful garden of Luxembourg, we go to the first place where Hemingway lived in Paris.

We began our journey where Hemingway began his Parisian life: on the Jacob Street in the 6th arrondissement. It was indeed at the Hotel Jacob (currently Hotel d’Angleterre) that Hemingway arrived with his wife on December 22th, 1921. The couple stayed in this hotel for several months, in the room 14, and they only paid 170 francs per month! They moved to 74, rue du Cardinal Lemoine between 1922 and 1923.

Eating out was very cheap back then, and the Hemingway couple was known for eating out at breweries. We thus went to visit the Pré-aux-Clercs. The menu cost at the time twelve francs, and the bottle of wine only sixty cents! Located at 30 Rue Bonaparte, it was close to the Jacob Hotel. If the place still offers a sweet and a warm atmosphere, the prices have however slightly increased since then…

The Shakespeare and Co Bookstore

Opened by Sylvia Beach in 1919, this legendary library & bookstore was once located at the 12, rue de l’Odéon, before moving to the 37, rue de la Bûcherie, where it is still existing. This place was then a meeting place for writers, artists and intellectuals of the time. They also slept between piles of books and shelves, on makeshift beds that they transformed into benches during the day. The bookshop was attended by famous writers such as Fitzgerald, Eliot, Pound, Gide, Paul Valery …

Another witness of the intellectual life of the time: the 27, rue de Fleurus. It was then the address of Gertrude Stein, writer, playwright and American feminist. Known today for her participation in the development of literature and modern art, it was her who defined the “Lost Generation”. She taught Hemingway the art of automatic writing, and thus influenced him greatly during his stay in Paris.

After this pleasant walk in Hemingway’s footsteps, the hotel invites you to continue on a more twirling touch. Do not miss our next article on the mythical Parisian places which Hemingway visited!